All You Need Is Kill - Script Review 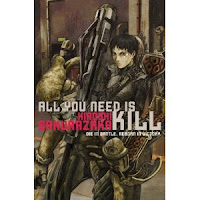 The Verdict:
The Non-Stop-Action of this Sci-Fi time-loop-movie leaves no room for character development or relationships in favor of huge action scenes, which are entertaining nonetheless.

What's it about?
An unskilled, new recruit dies in his first battle, but awakens one day prior to the battle, myteriously stuck in a temporal loop. He uses these repeats to master the art of killing and tries to win the battle and escape the loop.

Plot Summary [SPOILERS]:
The script starts with Cage jumping out of a burning Dropship into the 'Battle of Ruby Tuesday': Thousands of human soldiers fighting the insectoid Mimic. In this bloody and messy battle we meet Yonaburu, Cage's best friends, Rita, the best fighter in the world (and the female love interest). Cage's first instinct is to desert, which gets Yonaburu and him killed already on page 13.
Loop 2: Cage re-awakens in the barracks, a day before the fight and can remember all of that happening before. Again, he drops into the Battle of Ruby Tuesday, this time dying, while trying to save Yonaburu.
Loop 3: Cage awakens again. This time he tries to flee, escaping to a near-by beach, where he is found by some scout Mimics and gets killed
Loop 4: Cage is desperate. Trying to break out of this never-ending nightmare, he kills himself.
Loop 5: Cage realises, that there is no way out of this loop. Now he starts questioning the senior offices, gathers information, in order to save some of his friends, but still - he dies.
In a quick training montage, cutting between Cage and his superior office sparring and one Battle of Ruby Tuesday after the other.
Loop 93: The training shows it's impact, Cage survives longer and longer with each try.
Loop 187 & 203: Cage uses his knowledge of all his repeats to get an Battle Axe and with it he can kill the Mimic mother insect, but still dies exactly at 4:19.Cage loses all hope of ever winning the battle or escaping the loop, until Rita asks him: "How many loops is this for you?", shortly before he dies again.
Loop 329: Now the focus of the script shifts shortly, showing us Rita awaking in her bed. Cage finds her and answers her question from the last loop. She explains, that she was stuck in a loop, too. The Mimic have Antenna & Receiver Mimics, which can send signals back in time to warn their fellow mimics, Rita was and Cage is caught up in this signal, so he has to kill it, to be free and win the battle. Cage & Rita kill the Antenna Mimic and all Receivers, but, still, he loops back to the beginning.
Loop 393: Cage & Rita fall in love anew every day, and on the last pages of the script they have something like a relationship in fast-forward. But in this loop the Mimic attack the base, again Cage and Rita kill the Antenna and Receiver Mimic. Then Rita reveals, that she must be another receiver, and kills herself: Cage is finally free and wins the battle.

Script Observations:
Two formal things that bugged me: The script uses many noises, like Shup! Twamp! do describe the action going on. I am not sure, if I like this, but it reads very weird. Aside from that half of the words are CAPITAL, it feels like they are screaming at me. Not pleasant.
Back to the artistic choices, the script presents: The writing is dense and spot-on, as it is always focused on the action.
Something strange happens on page 39: Suddenly we have a Voice Over by the main protagonist, explaining all the background information in a huge dump for 5 pages. After that the Voice Over is used quite regularly, but it seem to appear out of no-where.
Shallow Relationships: Cage is stuck in a battle zone, always fighting and dying. This leaves not much room for a romance, so it feels kinda forced, when he suddenly has a full-on relationship with Rita (10 pages before the end, of all places, just to make us feel sad when she dies 2 pages later.
Generic Alien of the Week: The idea of aliens sending messages back in time to win battles is really neat, but other than that the Mimic are as bland and uninspiring as they come. Their aggressive behaviour, for example, isn't explained or discussed.
The Solution: I really hoped, that the solution to winning the battle and escaping the loop is surprising and refreshing, but, alas, it is fighting harder and killing more Mimic than before. It feels like a wasted chance. Afterall the script is trapped in the same militaristic view as the Ender's Game script I reviewed. The bland enemy reduces the action to routine killings, as we have in ego-shooters, as the reader has no emotional investment in the fights. As such, it feels a lot like the Halo Script, which also had non-stop action without an emotional core.

The Project:
Warner Brothers bought the spec script for a low-seven figure  from Dante Harper (Deadline: Hollywood), shortly after that, Doug Liman was slated to direct the movie for a 2012 release ( Variety). The spec is based on the 2004 novel by Hiroshi Sakurazaka (Wikipedia).
As the hunt for the lead actor has started, two names have been popping up: First Warner Brothers offered the project to Brad Pitt (Vulture). To be honest I can't see him doing such a mindless popcorn flick, on the other hand is was revealed, that Tom Cruise is in talks to take over the lead (THR). Cage is described as being 20, so both actors would be too old to take over that role, most probably there were changes made to the script to accomodate this.
Warner Brothers wants to get a huge star, as the movie will cost them about 150$ and to get the money back WB wants a big name attached to the posters.

As always, I look forward to hear from you. Post your comments without registrations below!

Have a great day,
- Tristan